President Barack Obama’s half-brother, Malik Obama, will be at the final presidential debate as Donald Trump’s special guest – but why? 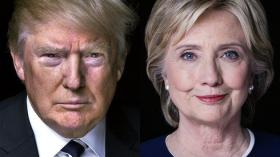 How to watch the third and final presidential debate

One of Mr Trump’s primary criticisms of Hillary Clinton is that, if elected, she will essentially extend Mr Obama’s presidency by an additional term. And bringing the president’s Trump-endorsing half-brother to the debate adds a theatrical element to that criticism.

Mr Trump made a spectacle of the second debate by bringing three women who have accused Bill Clinton of sexual assault in decades past – an apparent swipe at the Ms Clinton amid the controversy from his own remarks about groping and kissing women without their consent.

The final Presidential Debate in 90 seconds

Still, Malik Obama has zero relation to the Clinton campaign, so why is his presence at the final presidential debate important?

What did Donald Trump say during the second presidential debate?

Malik Obama, 58, was born in Kenya, but is a US citizen who lives between the village of Nyang’oma-Kogelo and Washington DC. He is the son of Barack Obama, Sr, a Harvard-educated economist who died in 1982. The half brothers first met in the US in 1985. According to Malik, the brothers served as each other’s best men at their weddings.

What are his politics?

In July, Malik Obama came out in support of Donald Trump in an interview in Nairobi with AFP.

“This Trump guy is a really cool guy and I like him because he speaks from his heart and he is so down to earth,” he said. “Trump is so much concerned about security and he wants to make America great.”

In an interview with the New York Post, he added that the Republican Party’s stance against same-sex marriage is more in line with his own.

“I feel like a Republican now because they don’t stand for same-sex marriage, and that appeals to me,” he said.

In 2013, Mr Obama tried to follow in the footsteps of his younger half-brother, Barack, in a Kenyan gubernatorial race by huge margins. During his campaign – under the slogan “Obama here, Obama there” – he aligned himself with the US president in an effort to win the office.

“Why would my people settle for a local connection when they have a direct line to the White House?” he said

Why is Donald Trump targeting President Obama at this debate?

Mr Trump is not debating Mr Obama tonight, he is debating Hillary Clinton – so the stunt raises questions about his intentions.

The Page Six announcement came hours after Mr Obama criticised Mr Trump’s claims that the election is rigged, as polls and electoral map predictions continue to suggest a big loss for the New York businessman.

“I invite Mr Trump to stop whining and try to make his case to get votes,” Mr Obama said during a presser in the White House Rose Garden on Tuesday. “He’s already whining before the game’s even over.”

However, there is no clear connection between the events.

Nonetheless, Mr Trump has claimed that Mr Obama was actually born in Kenya, thus not eligible to be president of the United States. His birther claim has been repeatedly debunked, even by the president himself.